We can help you to understand your options, decide on a course of action and complete administrative procedures. Book your first 45-minute consultation completely free of charge.

1. Payment of a sum of money

– The applicable procedure is governed by the federal act on debt collection and bankruptcy (LP in French / SchKG in German).

2. Execution of a specific claim

– The applicable procedure is governed by the CPC.

In most cases, you (the creditor) should request forced execution by filling in a form provided by the relevant cantonal office.

Exception: You don’t have to request forced execution in the following cases:

a. the debtor’s spouse or registered partner;

b. the child of the debtor, and the debt relates to parental authority;

c. an adult collecting a debt relating to a power of attorney on the grounds of incapacity;

d. the debtor’s adult child or grandchild, and you live with and pay the debtor their income;

e. the beneficiary of a lifetime maintenance contract, and the debt relates to the debtor’s bankruptcy.

What should I put in the request?

The forced execution request that you submit to the relevant office, verbally or in writing, must include:

1. Your name and place of domicile, and those of your legal representative if applicable;

– If you live abroad, you should indicate your nominated domicile in Switzerland;

– If no indication is given, the office to which you submit the request is taken to be your nominated domicile.

2. The debtor’s name and place of domicile, and those of his or her legal representative if applicable;

– In the case of forced execution in relation to an inheritance, indicate each of the inheritors to be notified.

3. The amount of the debt or the collateral required and, if applicable, the interest rate and the day from which interest is applied;

4. The contract or other proof of obligation, along with its date.

In addition, if a guarantee was made for the debt and the owner of the pledged property is a third party, the request must indicate that person’s name and must indicate whether the debtor or the third party lives in the property. The third-party guarantor must be made aware that a forced execution request is in progress.

If the debt originated in a foreign currency, the amount must be converted into Swiss francs using the rate applicable either on the day the request is made or on the deadline for payment (the creditor can choose).

The forced execution request form for the canton of Geneva can be found at the following link (in French):

Upon receipt of a force execution request, the debt collection office sends a payment order to the debtor, mentioning the information indicated in the request. It obliges the debtor to either:

b. oppose the forced execution (see below) within 10 days.

The debtor receives notification of the payment order at his or her place of residence or work. If the debtor is not there, it can be left with another adult living in the same household or with an employee of the debtor.

If the payment order is not properly delivered, it can be declared void at the debtor’s request. It is automatically void if the debtor never receives it because it is not delivered properly.

To oppose a payment order, simply declare your opposition to the agent delivering notification or inform the debt collection office of your opposition (verbally or in writing) within ten days of receiving it. You are not usually required to justify your opposition. You may be able to oppose the payment order after the 10-day deadline under certain conditions.

If the debtor opposes the payment order, the forced execution is suspended. The creditor has a few different options for resuming the process, depending on the basis of the debt.

1. A creditor who has an enforceable judgement delivered by a tribunal or equivalent can request definitive dismissal of the opposition, and the forced execution process continues.

– Some examples of documents deemed equivalent to an enforceable judgement are:

a. transactions or acknowledgements that have been through the court system;

b. a certified enforcement order;

c. a decision delivered by the Swiss administrative authorities;

2. A creditor who is in possession of an acknowledgement of the debt can request provisional dismissal of the opposition, which will later become definitive if the debtor does not initiate legal proceedings to be released from the obligation to pay within the specified deadline (see below).

– Some examples of documents sufficient for provisional dismissal are:

a. an certified deed of acknowledgement;

b. a bilateral contract, subject to certain conditions;

d. legal documents relating to forced execution, such as a certificate of shortfall upon execution.

3. A creditor who does not have any documents justifying dismissal of the opposition must start legal proceedings to have the debt recognised or the opposition dismissed.

If the debtor opposes the payment order but the opposition is dismissed, the debtor can go to court to prove that the debt does not exist or is not his or her responsibility.

If the debtor’s opposition is provisionally dismissed, the debtor can initiate legal proceedings to be released from the obligation to pay on the basis that the debt is no longer due. If this request is denied, the provisional dismissal becomes definitive and the creditor can ask to go ahead with the forced execution process. 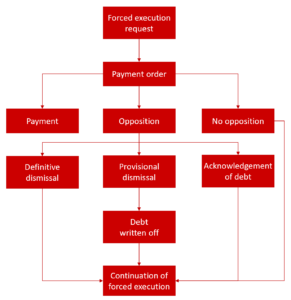 The debtor must receive notice of repossession no later than the day before execution.

The debtor has to be present for the repossession and must cooperation with the debt collection office by indicating all of goods or property that he or she owns, even those not currently in the debtor’s possession.

Items that can’t be seized include:

Income from work, maintenance payments and benefits can all be seized.

The order of priority for seizing assets is as follows:

2. Real-estate assets (seized only if the debtor’s moveable assets don’t cover the debt);

3. Sequestered assets or assets to which third parties can stake a claim.

The creditor can claim the goods seized any time from one month to one year after the date of collection, or six months to two years in the case of real estate.

If one creditor succeeds in achieving the seizure of a debtor’s assets, another who requests continuation of forced execution within 30 days of the repossession can share equally in the distribution of the assets – this is the first round of repossession. If another creditor requests continuation of forced execution more than 30 days after the first, another round of repossession will take place, so that creditor will only receive what remains once all first-round creditors have been compensated.

The debt collection office informs the debtor of imminent bankruptcy as soon as it receives the request to continue with the forced execution procedure. The notification sent to the debtor includes:

After 20 days have passed, the creditor can ask the judge to declare the debtor insolvent, which comes into effect as soon as the judgement has been delivered.

Once the debtor has been declared bankrupt, all of his or her seizable assets are repossessed in order to pay the creditors.

Debts are categorised according to the following order of priority, which dictates how the debtor’s assets are shared among the creditors if not sufficient to fully cover all debts: